A priest with secrets

Translated from an article in the Danish

new interests about a small village in South France.

Written in Danish by Henrik Sten-Knudsen

Already at the drive up to the church there are small but any way clearly signs that this small village is different from the other small villages in the area.

One reaches the village by a small country road. The road is winding - running along rock walls and wine fields, starting from the road between Couiza and Espéraza (in fact it’s almost in the centre of Couiza). At the start of the houses and the small narrow streets a big sign announces that no treasure hunting are allowed in the area, according the announcement of July 28 1965. The parking lot at the end of the road is full of cars – mostly with foreign numberplates. And there – where the village is ending by a tall slope, 300 meters above the surrounding area – lies the odd and mysteries buildings everybody has come to see, surrounded by walls – like mysteries - wrapped in a mystery.

The opulent decorated “Maria Magdalena” church. The ingenious constructed garden and the peculiar tower “Tour Magdala”. The priest’s extraordinary and luxurious “Villa Béthaine” – every thing placed very dramatic on the edge of the mountain with a windy view over Languedoc and it’s hilly woodland - and far to the south the peaks of the Pyrenees covered with snow.

To day there are 112 inhabitants in the village with the beautiful name “Rennes-Le-Château”. The village might, as well had been an other small French sleepy village. But the history about a pour priest beginning inexplicably using money in the end of previous century attracts every year thousands of curious people. Especially one novel has created a new interest for the area.

The author Dan Brown’s bestseller novel “The Da Vinci Code” does not mention the village by name. But the readers who go to the basic of the story and separate reality from fictions in this surprising story are quickly ending up at Rennes-le-Château. The only link to the village in the story is Jaques Sauniére. A 76 old expert in preserving, who at the first page let him selves be shoot down in one of the galleries at Louvers galleries to kick-start the story. This figure shares name with the mystery priest in Rennes-le-Château - Bérenger Saunière.

A priest arrives to the village

It was in June 1885 that Saunière for the first time arrived to Rennes-le-Château south of Carcassonne in the Southeast most corner of France. At that time the village had 298 inhabitants. The only connection to the rest of the world was a narrow path. The village was missing regular water supply and was in any way pour and neglected.

Saunière was a handsome dark-haired broad-shouldered man at 33 years – determined - with a wish for doing something useful in his new living. It was natural to renovate the disrepair church in the village. The church was built in the Middle Ages. But there was no room in the budget for renovation of churches in small villages – so the money had to be found somewhere else. As all priests in small villages, Saunière was purely paid. Food he had to get hold of by fishing and hunting. The inhabitants in the village where not better of. Saunière was how ever a respected and charming man – so it succeed him to collect enough money both from the locale inhabitants and locale wealthy – especially a generously countess from the area gave a large amount.

Together with locale craftsmen’s hi started the renovation. A new altar - a new floor – new windows. The churchyard was also renovated, meaning that several tombs where removed – and in this connection opened up. Saunière must – for hundreds of hours - in those years - have been digging and pulling up old rotten wooden floor – moved around the gravestone at the churchyard – moving around pillars inside the church.

What did the pillar hide

Around 1891 something happened. After a mystery discovering of some old documents in a hollow out altar pillar – Sauniére sent away the craftsmen – Hi wanted to continue by himself. According to the local - one often saw him digging at the churchyard in the nights. In the same period hi was writing in his diary about September 21: Letter from Granès, finding a tomb, rain in the evening. Simultaneous Sauniére started to leave the village for days. Hi was seen roaming around in the area – often dragging along a heavy suitcase.

Shortly afterward hi restarted the renovation. But this time at a very

big scale. Not alone was the church renovated – it was also richly

decorated with paintings and sculptures - among other a very

unusual red painted figure of Satan at the entrance of the

church – ingenious reliefs and figures of saints. But Sauniére hardly

had started yet. For himself hi build – along the church – a large and

– according to the rumors among others for famous artists and

high-up politicians. In front of the house he lay out a small park with

garden paths, fountains and benches. A fortress like wall with

terrace a greenhouse and a renaissance tower with a large library

surrounded the park and the buildings. The inhabitants in the

money. Several houses were renovated and Saunière build a new

and broad road up to the village and established freshwater supply

to the inhabitants. In today’s prices (2005) it’s estimated that the

In 1910 it was too much for the bishop in Carcassonne and when Saunière permanently refused to explain where he had all the money from, he was dismissed from his living. Hi continued to give services in the villa until hi died in 1917.

Saunière never betrayed his secrecy – or perhaps it was exactly the last thing hi did. When dying hi confessed for two hours to a priest from a nearby village. According to the present in Villa Béthaine the priest had turned pale when he returned from Saunière saying that it had not been possible for him to give Saunière absolution.

Poussin has the key

There had to pas 40 years before anyone took notices of the mystery. The inhabitants received the sudden interest for their village with mixed feelings when a TV-broadcast in 1960 concluded that Saunière had found a fortune – and some part of fortune probably still was buried – the area and village was afflicted by treasure hunters with hoes, spades, power drills and explosives. Finally the authoritative went to action and forbid all kind of treasure hunting.

At a time - more methodical investigation started – and then everything started in a new dimension.

One of the most fascinating and complicated theories takes in consider that Saunière under his renovations of the church discovered that one of the hollow out pillars were hiding some wooden cylinder sealed with wax - containing two old documents at heavily readable Latin. One know that the priest told the locales that it was some pretty non important descriptions about an earlier reconstruction of the church – After that he sent away the craftsmen. Perhaps he was lying. Later discovering indicates that the documents in fact where some copies of texts and phases from the bible, arranged in such a way that they contained hidden messages. Using an inscription on one of gravestone at the churchyard could break the code to the messages and be the key.

The first document was relatively easy to decode and was telling about a treasure belonging to Dagobert the 2nd - a king in Lanquedoc in the 7th century. The second document contained an advanced code - difficult to decode. When it finally succeed there was several and cryptically messages such as “Poussin has the key”

Nicolas Poussin was one of the painters at the Royal Court by the sun king. In the 1600-years hi painted among other things the well-known painting “Les Bergers d’Arcadie”. It’s an idyllic scene with some shepherds standing around a sarcoma in the scenery. In connection with a dig several hundreds year later a similar sarcoma showed up some few kilometers from Rennes-les-Chârteau. When comparing the rock-walls in the background on the painting and the background by the sarcoma close to Rennes-les-Chârteau it was clear that Poussin pretty well could have placed his easel at Rennes-les-Chârteau. Was it a coincidence? Or had the great master an important and secret knowledge? Was his painting a clue? Why else the coded message – “Poussin has the key”

The sarcoma doesn’t exist any more. The sarcoma was placed on a private property. At last the owner was so tired of all the treasure hunters – some of them using dynamite in their effects to discover the secret of the sarcoma – that he blew up the sarcoma himself and drove away the remaining.

Maria Magdalena or the gold of the Cathares

An other theory is that Saunière found some very controversially material that he used to blackmail the church. Perhaps it was the Gospel according to Maria Magdalene – the central subject in “The Da Vinci Code”. A different description of Jesus life could shake the fundament for the bible and turn upside down regarding to the church doctrines for two millenniums.

The theory has its roots in an old legend telling that Maria Magdalene after Jesus death escaped over the Mediterranean to the southeasterly France together with the children she had together with Jesus. She was actually Jesus legal wife and not the converted prostitute as the traditionally interpretation of the bible has done her to. Maria spent the rest of her life to spread out the early Christianity in Lanquedoc. Lanquedoc even to day worship her as a saint. It was also after Maria that Saunière named his tower “Tour Magdala”

Some researchers think that Sauniére found gold either in the church or in the surrounding area full of caves. Lanquedoc has a thousand-year long history with migrations – wars – looting and persecutions. Even something as bizarre as a crusade inside the border of Europe has happed in Lanquedoc. In wartime people are collecting together their fortune to escape or perhaps buried their fortune. Therefor - there might be huge treasures hidden in this part of France.

In the 1100-years the Cathares showed up in Lanquedoc. They were Christian but had their own interpretation of the Christianity. As the years went on they had more and more believers – The church felt it like a threat and the pope decided to fight them in a crusade. The Cathares were slaughtered by the church but it never succeed to find their treasures – to day the only remaining are the huge castles on the mountain peaks – like deserted eagle nests.

It’s easy to be fascinated by the mystery about Rennes-les-Château. Everybody can be participated – everybody can invent and continue the story – no matter you prefer to flutter and follow every new fantastic supposition or you choose to be so skeptical that you don’t dare to do or think anything in fear of losing contact with realities.

But anyway – when you are pointing toward the church, the garden, Tour Magdala and Villa Béthaine and looks inquiring at her, she smiles and cocks her head saying

Sure – something he found. He must have found something – that’s obvious ! 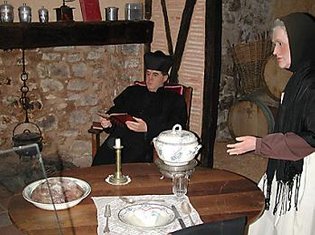 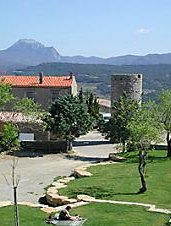